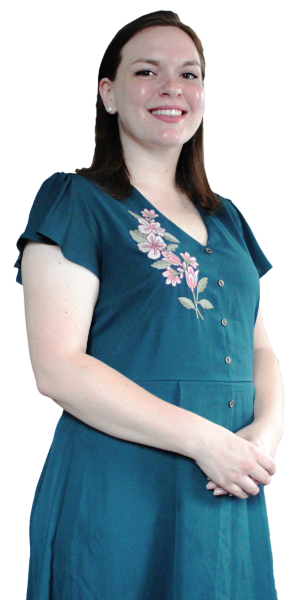 As a history major, June Titus has explored some painful and traumatic chapters in America’s past, from a puritanical crackdown on obscenity in the 19th century to slaveholding by a Rutgers official in the 18th century.

For Titus, these stories are not isolated events from some forgotten past.­­ Their impact can still be felt. She sees the study of history as an act of empowerment, a means to understand humankind in all its depth and complexity.

A native of Langhorne, Penn., Titus has always wanted to be a historian. She transferred to Rutgers from American University, drawn in part by Rutgers’ longstanding excellence in women’s history, and the opportunity to develop a complementary second major in women’s and gender studies.

“There was never a time in my life where I didn’t want to be a history major,” she said. “And that has only grown since coming to Rutgers.”

Titus said she has benefitted from strong faculty mentors, including Kristin O’Brassill-Kulfan and Camilla Townsend, both of whom have encouraged her work and opened her eyes to opportunities beyond the classroom.

“In my first semester Dr. O’Brassill-Kulfan told us about a conference that was happening in Camden on the history of disability,” she said. “One of the other students from my public history class and I decided to go, and now we’re best friends.”

As an undergraduate, Titus led public tours that highlighted the Scarlet and Black project, a Rutgers research initiative that revealed the university’s connections to slavery and how Rutgers benefitted from the displacement of Native Americans.

The Scarlet and Black project, which was widely praised, was undertaken by The Committee on Enslaved and Disenfranchised Populations, chaired by Deborah Gray White, a Board of Governors Distinguished Professor of History.

The tours worked their way around the College Avenue Campus, drawing dark connections to historic buildings and famous names, but also winding up at the Sojourner Truth Apartments, named for the abolitionist and women’s-rights activist, who along with her parents was owned by the family of Rutgers’ first president, Jacob Hardenbergh.

“The tours were eye-opening,” Titus says. “A lot of people raised in the Northeast don’t know anything about urban slavery, but the fact remains that New Brunswick was a big hub for that.”

Titus made more eye-opening discoveries as an intern at the Center for Women’s History at the New York Historical Society. She examined the work of the New York Society for Suppression of Vice, and the activities of its secretary and self-appointed moral crusader Anthony Comstock, who waged war against obscenity in the late 19th and early 20th centuries. His influence prompted the federal government to pass the Comstock Laws, which outlawed the circulation of obscene materials through the U.S. Postal Service.

In a blog post that ran on the Society’s website, Titus points out that birth control information and contraceptives fell under the category of indecent material.

Indeed, she said there are connections between the Comstock Laws and recently passed federal legislation aimed at sex trafficking which drew criticism from free-speech advocates, technology companies, and sex workers.

“The laws may look like they are morally correct, but they can have a really dramatic and detrimental impact,” she said.

Looking ahead, Titus plans to enter a doctoral program in women’s history. The field, she says, is wide open with emerging specialties like public history offering new opportunities for careers.

“There are a lot of places I can see myself,” she said. “But I have always wanted to be a professor.”