Vanessa Ogle, Professor of History at the University of California Berkeley will deliver a talk entitled, "'Funk Money:' Decolonization and the Expansion of Tax Havens, 1950s-1960s" on October 8, 2018.  Her current book project is titled Archipelago Capitalism: A History of the Offshore World, 1920s-1980s. The project reopens the history of twentieth-century political economy and capitialism (in its free-market, neoliberal variety in particular) in Europe and beyond. http://history.berkeley.edu/people/vanessa-ogle 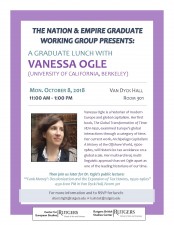