How to Do It at Rutgers

A Conference in Honor of

“How I Almost Became a Quantitative Historian”

“Clio, The Computer & Moi: The Confessions of a Geek Wannabe"

"The 2020 Census is Coming: Historical Lessons on the Supreme Court's Ban on a Citizenship Question"

“The Bell Curve:  How Statistics Shaped an Historian's Career”

“Doing History: The Book and Beyond”

“‘A Chamber of Horrors?’ How Grad School Taught Me How to Write About the Lynching of Black Children”

“‘May Our Business Get Better and Better by the Day’: A 14th-Century Milanese Merchant in Venice”

“Mineral Pharmacology within the Medical Marketplace of Early Modern  England”

“Like a Cock: Merchant Masculinity in Early Modern Northern Europe"

“Strangers in Italy: Fieldnotes from the Archives”


Warren I. Susman Award for Excellence in Teaching, 2017

Board of Trustees Award for Excellence in Research, 1988

Women on Their Own: Interdisciplinary Perspectives on Being Single, ed. (with Virginia Yans) (New Brunswick, 2007)

The Voices of Gemma Galgani: The Life and Afterlife of a Modern Saint (with Cristina Mazzoni) (Chicago, 2003)

Fate and Honor, Family and Village: Demographic and Cultural Change in Rural Italy since 1800 (Chicago, 1979) 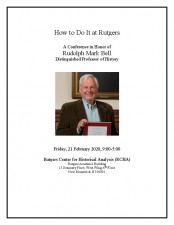