"Islamic Revivalism in Yugoslavia and the Crisis of Europe"


Emily Greble's research interests include Islam in Europe, the transition from empire to nation-state, civil conflict, and local responses to socialism. Greble’s first book, Sarajevo, 1941-1945: Muslims, Christians, and Jews in Hitler's Europe (Cornell, 2011) examines the persistence of institutions and networks in the city of Sarajevo under Nazi occupation during the Second World War.  At her Rutgers talk, Greble will present from the forthcoming book, Muslims and the Making of Modern Europe (Oxford, 2021), which spans from early experiments of Muslim citizenship in the 1880s to the development of “Muslim minority” policies in the wake of WWI, to the formation of revivalist and Islamist insurgencies in the 1940s. The talk will discuss the ways that Islamism emerged as a distinctly European mass movement in the 1930s, how it operated within Hitler’s European order, and then the forgotten civil war of the 1940s when Islamists battled against Communists in order to save Shari’a. 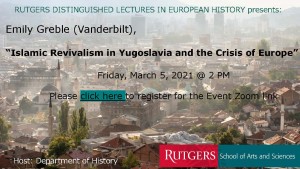