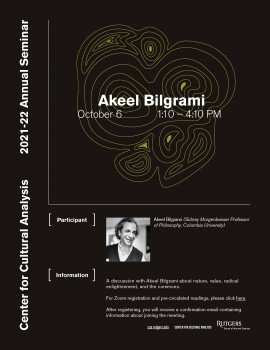 A discussion with Akeel Bilgrami about nature, value, radical enlightenment, and the commons.

Akeel Bilgrami is the Sidney Morgenbesser Professor of Philosophy at Columbia University. As a philosopher of language and mind, he has published Belief and Meaning (1992) and Self-Knowledge and Resentment (2006). As a philosopher of moral psychology and politics, he has published Secularism, Identity, and Enchantment (2014), and is presently completing a major study of Gandhi, situating Gandhi's thought in seventeenth century dissent in England and Europe and more broadly within the Radical Enlightenment and the radical strand in the Romantic tradition. He has been Chair of Columbia’s Philosophy Department and was for many years the Director of the Heyman Center for the Humanities. A link to pre-circulated readings will be emailed to registered participants.

For Zoom registration and to receive copies of pre-circulated readings, click here.