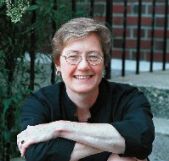 Suzanne Lebsock
Emerita Board of Governors Professor of History
Affiliate, Women and Gender Studies
Degree: Ph.D., University of Virginia
Rutgers : At Rutgers 1977-1992 and 2003-2012

Over the long haul my primary concern has been finding ways to uncover, understand, and write about the lives of ordinary women, mainly in the American South. At present I’m curious about several subjects, including the concept of women’s culture, the meanings of honor among people who presumably had none, and relationships between history and fiction.