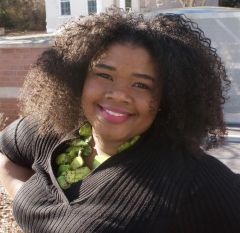 Beatrice J. Adams is a fifth-year doctoral student in African-American and African Diaspora History at Rutgers University. She received a M.A. in Social Sciences from the University of Chicago and a B.A. in History from Fisk University. In her dissertation, “Standing in the Warmth of Their Own Sun: African Americans who stayed in the American South during the Second Great Migration”, she examines African Americans’ relationship to the American South focusing on issues of identity, belonging, and migration. Centered on the experiences of African Americans who remained in and returned to the American South during the period commonly associated with the Second Great Migration (1941-1970), her project aims to interrogate the role of migration in both African Americans’ quotidian realizations of freedom and conceptualizations of freedom.