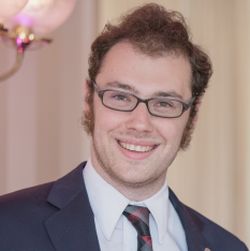 Danny received his BA in History and Psychology from Tufts University and his MA in European Studies at Yale University.  At Yale, he wrote his Master’s Thesis, “Landscape, Memory and the Early Modern Sense of the Past,” on the role of social memory in early modern England, focusing specifically on its interaction with the monumental landscape.  At Rutgers, he plans to pursue similar research topics, but within a wider geographic range including New England and the early modern Atlantic world.  Danny is from Kittery Point, Maine, and is also researching topics in the social history of seventeenth and eighteenth-century Maine.