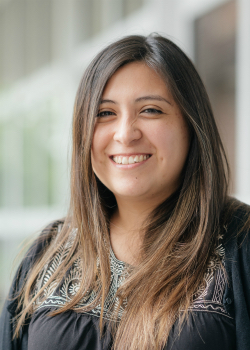 Yesenia Barragan is a historian of modern Latin America and the Caribbean. She specializes in the transnational history of race, gender, slavery, and emancipation in Afro-Latin America and the African diaspora in the Americas. Dr. Barragan earned her Ph.D. in Latin American History from Columbia University, where she was a Ford Foundation Fellow, and her B.A. in Philosophy and History from Brown University, where she was a Mellon Mays Undergraduate Fellow and Beinecke Scholar.

Her current book project, Frontiers of Freedom: Slavery and Gradual Emancipation on the Colombian Black Pacific, is a social, political, and geographical study of the gradual abolition of chattel slavery and the post-emancipation era in the majority-black Colombian Pacific, the largest area in the Americas inhabited primarily by people of African descent. The first English-language study of gradual emancipation in Colombia, Frontiers of Freedom reframes the history of emancipation in the Atlantic World by centering Colombia and the Colombian Pacific within a larger history of antislavery and gradual abolition. Dr. Barragan is also the author of Selling Our Death Masks: Cash-for-Gold in the Age of Austerity (Zero, 2014), a creative, historical ethnography of cash-for-gold shops in the wake of the latest economic crisis based on fieldwork and archival work in Spain, Greece, and Colombia. Her next project explores hemispheric black migrations and fugitivities in the nineteenth century Americas.

Dr. Barragan is deeply committed to public historical work and engagement. She was previously a regular contributor to Black Perspectives, the leading online platform for public scholarship on global black thought, history, and culture established by the African American Intellectual History Society, and an opinion columnist for the major Latin American media outlet, Telesur. She is the creator of “The Free Womb Project,” a bilingual (English and Spanish-language) digital collection of “Free Womb laws” across the eighteenth and nineteenth century Atlantic World. She has also served as a Legal Expert for asylum cases related to Colombia.

Lastly but importantly, Dr. Barragan is a first-generation daughter of poor/working-class immigrants from Latin America, and a longtime activist involved in social and racial justice movements. She has mentored students in the First Generation Network and Mellon Mays Fellowship at Columbia University and Dartmouth College, where she previously taught, and looks forward to working with students at Rutgers University.