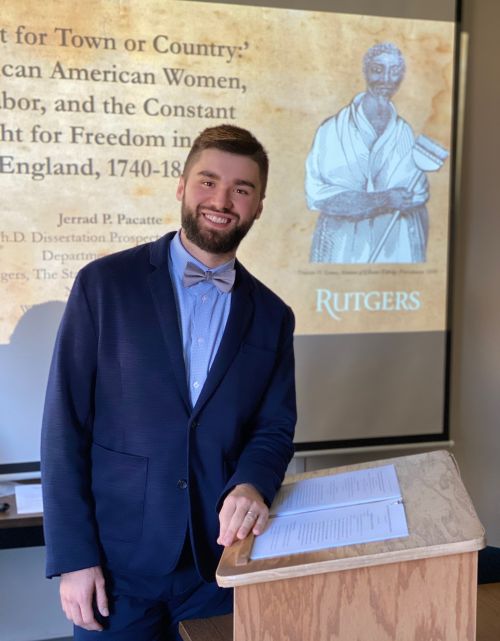 Jerrad P. Pacatte is a doctoral candidate and School of Arts and Sciences Excellence Fellow in the Department of History at Rutgers, The State University of New Jersey-New Brunswick. Trained in eighteenth and nineteenth-century African American and women’s and gender history, Jerrad’s research and teaching interests focus on the intersections of gender, labor, slavery, and capitalism in late-colonial, revolutionary and antebellum-era America. Written under the supervision of Professor Erica Armstrong Dunbar, Jerrad’s dissertation examines the lives and labors of African American women in pre-Civil War New England.

From 2017-18, Jerrad chaired the Rutgers History Department’s Interpreting American History (IAH) series. Entitled the “Scars of the Past: Violence in American History and Memory.” the series commemorated the fiftieth anniversary of the tumultuous year 1968 in U.S. history. As chair of the IAH, Jerrad also oversaw the creation of the Deborah Gray White Distinguished Race and Gender Lecture Series, an annual lecture which hosts outside scholars whose work critically explores the intersections of race, gender, and sexuality in U.S. history. The series is named in honor of Professor Deborah Gray White and her indelible impact on the Rutgers academic community and the field of African American women’s history.