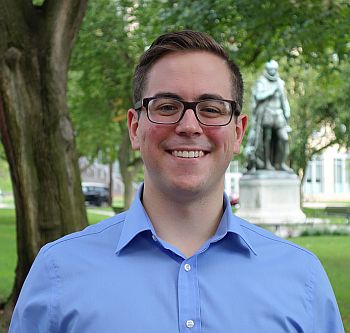 Adam J. Stone is a second-year PhD student studying United States Foreign Relations in the 20th Century with an interest in broadening understandings of ‘foreign relations’—in particular with the Soviet Union, the German Democratic Republic, and the Federal Republic of Germany in the 1970s and 1980s. While studying at The University of Michigan (B.A. History, B.A. German, 2017), Adam wrote about President Gerald Ford’s attempts to secure an agreement on SALT II with Soviet General Secretary Leonid Brezhnev at Vladivostok, USSR in 1974, focusing on the role that domestic politics played in influencing President Ford’s positions on SALT II. Most recently, Adam has coauthored (with Andrei S. Markovits and Kenneth Garner) "Chapter One: Instituting Jewish Life at the University of Michigan, From the Late 19th Century Until 1923" in Andrei S. Markovits and Kenneth Garner, The Boundaries of Pluralism: The World of the University of Michigan's Jewish Students from 1897 to 1945 (Ann Arbor: Maize Books, In Press 2019).